Alexander Csoma de Kőrös set off on a long journey by foot from Transylvania in the beginning of the 19th century in order to find the origins of the Hungarian people. On his way, he was commissioned by William Moorcroft, a British employee of the East Asia Company to compile the first Tibetan-English Dictionary and the Tibetan Grammar of scientific level. To find a helper in his daunting endeavor, he made a detour to the remote village of Zangla, to meet Sanghe Puntsog, a highly educated lama. Working in an unheated room of the royal palace with the help of Sanghe Puntsog lama, this book would later become his magnum opus, making Csoma a well-known scholar and the founder of Tibetology.

In 2007, his room in Zangla Palace, identified by Ervin Baktay – a Hungarian orientalist following Csoma`s route a hundred years later – and the neighbouring shrine full of valuable relics, were in disrepair, on the verge of collapse.

In the summer of 2008, a group of architects decided to do some emergency interventions on Zangla Palace, in order to save the room where Alexander Csoma de Kőrös started to write his dictionary in 1823.

In 2010 we registered Csoma’s Room Foundation officially in Budapest, Hungary, as a non-profit organisation behind our activity. The foundation embraces Csoma`s humble open-minded attitude towards diverse cultures. He learned most of the languages of the regions he crossed on his slow way of traveling overland on feet from Europe to India; his determination keeps inspiring us even today.

Our long term goal is to create an intercultural transfer of knowledge, experiences and values, not only in the local community, but also in the broader community outside Zangla as well.

The Himalayan village remains a fragile organic texture interwoven with traditions that are currently threatened by global influences through tourism, mass production and media. We aim to address this in its social complexity, which is much more than the sum of their material heritage. Through education and community study we got a cleaner picture emerged as to the needs of the community, and a path forward involving cooperation for our mutual benefit. By focusing on the impact on future generations, the community understood our deeper long term motivations through the eyes of their children.

It all started in 2008, with the emergency interventions on the palace where Csoma used to live. We embarked on our long journey of acquiring knowledge about local materials and building methods through the careful guidance of Zangla craftsmen. We learned the features of the building gradually, each year taking more and more difficult and risky tasks. The summer construction season is limited to three months.

The greatest difficulty was getting water to the top of the palace mountain, consisting of solid rock, thus lacking any natural water sources. As all work processes large volumes of water, we had to use human or animal power to get it to the site.

Since the natural binding material is loam, which is sensitive to the weather, and the traditional roof is flat (sloping roof hasn’t developed there, due to the dry climate), the collapsed structural elements (slabs, walls) can not be preserved in their collapsed state without further degradation. Therefore restoring collapsed structural  parts of the building seems justified and adequate. 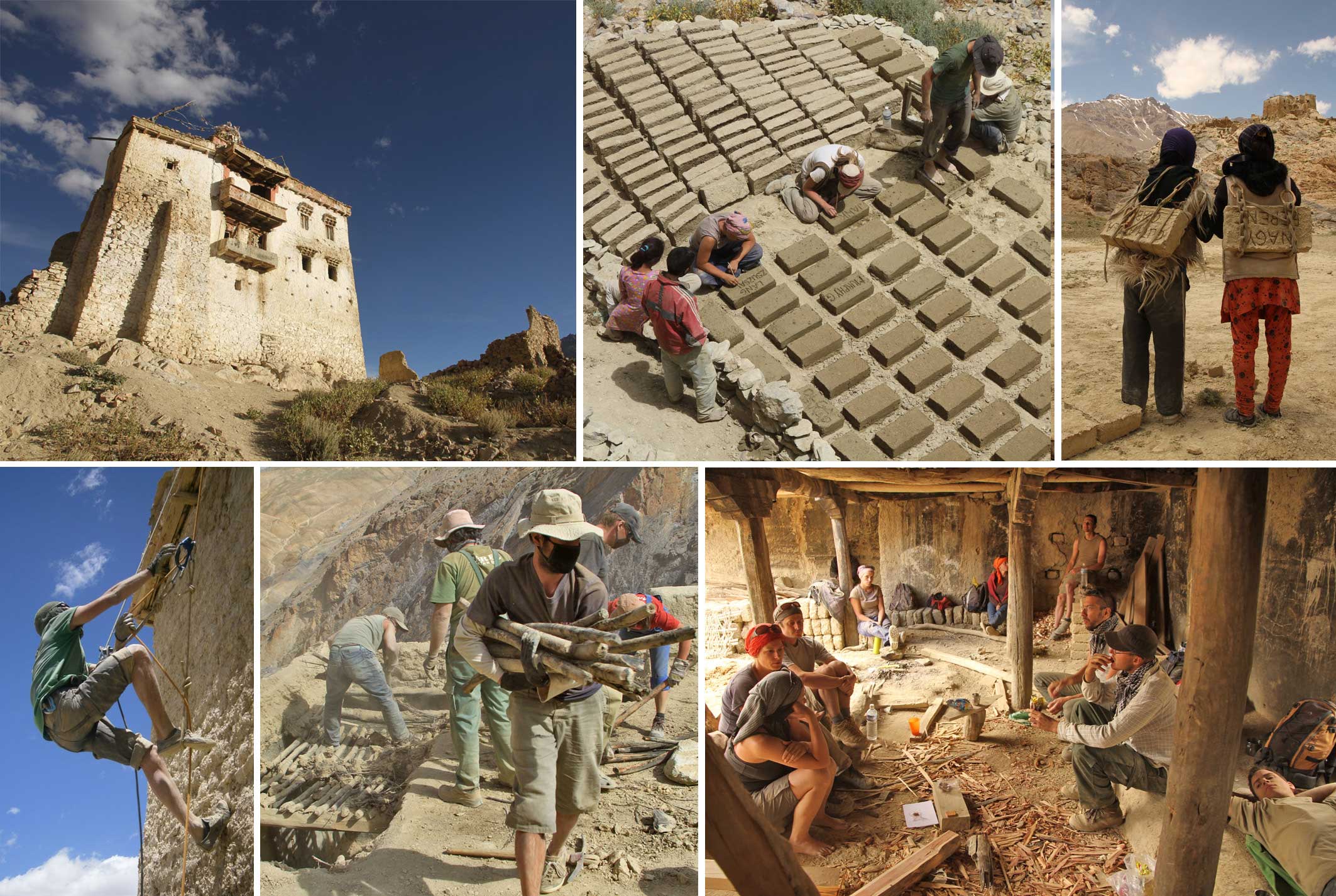 The building materials used in the building are being reused when possible, otherwise sourced from the same queries if information is available, as those used during construction. All interventions are trying to follow traditional techniques.

An exception material is the glass, which provides protection against the weather and equal historical replacement is not known. In techniques, scaffolding is sometimes substituted with alpine techniques using ropes, to save wood, whenever applicable, as negative side effects are not known of this practice.

In 2009, the italian Stupa Onlus Association restored probably the most important Stupa of Zangla. Driven by the best of their intentions, they entrusted the local Royal family, backed with religious supervision, to carry out the project. Unfortunately the renovation payed no attention to the rich historical background of the stupa, supposedly of Kadampa origin, instead altered the size and shape of the chörten (stupa in tibetan language) using cement and synthetic paint extensively. We protested against the action, as a result, the Italian sponsors got in touch with us. After lengthy negotiations we agreed in a cooperation. We offered architectural planning and professional supervision for the Italian Association in return for their negotiating power and proper funding. In 2011, we surveyed more than 10 stupas and their immediate surroundings by total station. After risk assessment we selected five to start with. 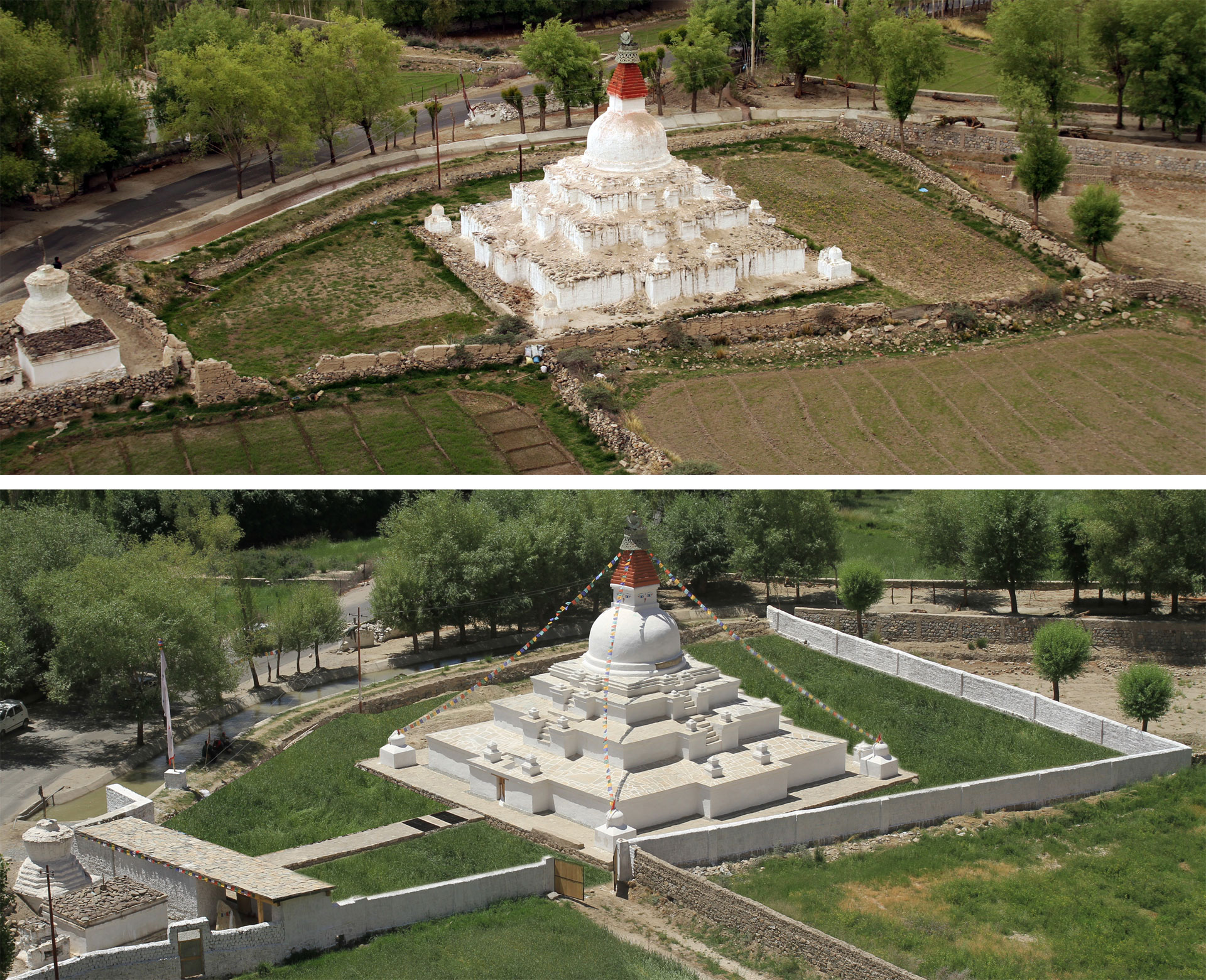 Each renovation  was carried out using traditional materials and technology, and hiring local experts trained by the Himalayan Cultural Heritage Foundation to specialize in traditional restoration. Our mission on this field is to provide a healthy alternative to the quick restorations and alterations using cement on historical stupas.

In February 2011, we visited the region for the first time during winter. The mountain passes are closed this time, so apart from military helicopters, the only way to approach the region becomes a trek over the frozen ice of the Zanskar river. In Zangla we realised that the reinforced concrete structure of the public school can not be heated during winter, so the education is suspended for 3 months. The village nevertheless has organised itself for winter education, temporary converting the school balcony to a greenhouse, using an agricultural foil. That was the time when we came up with the idea of a passive solar school building that could warm up using the greenhouse effect and the human body heat, storing it efficiently using local straw for insulation, to provide temperature suitable for human dwelling.

The design was completed in cooperation with Archikon Architects. In 2012 we built the first classroom, the second in 2013 and two more in 2014. In 2015 a restroom and a multi-functional room serving as teachers accommodation in winter and community kitchen during summer was completed in 2016, together with a gravel road connecting the school to the village road network. 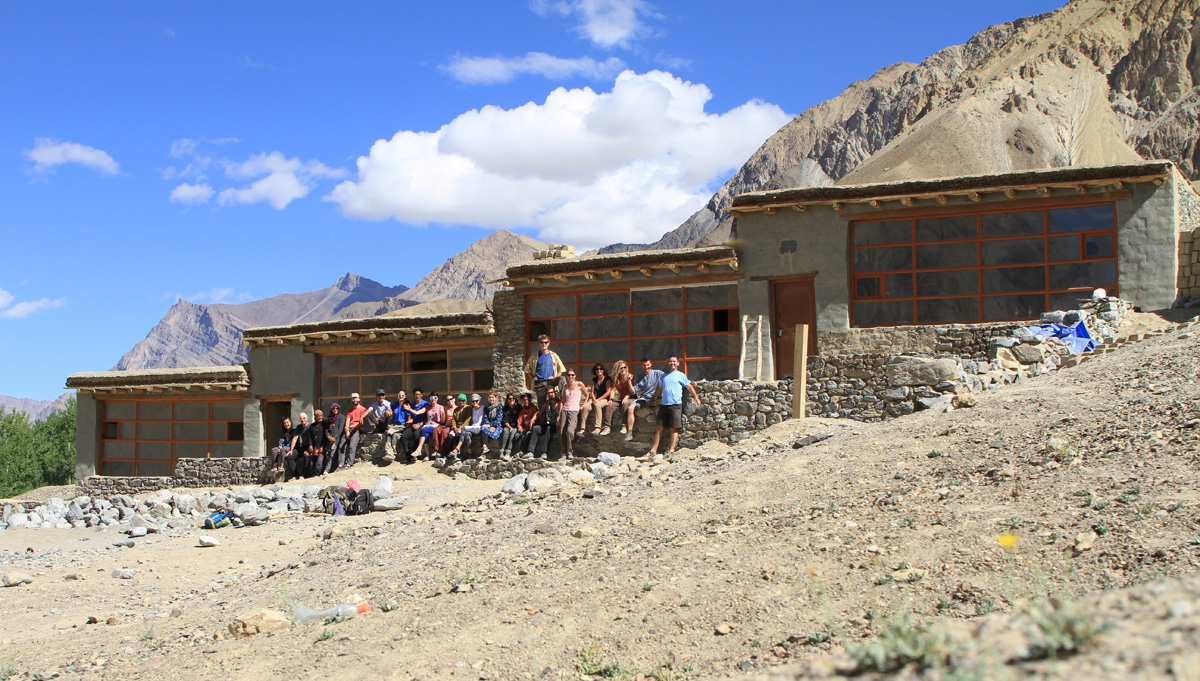 One of our main principles was with the school construction, to use ‘open source’ materials and techniques easy to copy by the locals, to promote sustainability, small ecological footprint, and eco-friendly attitude. We are using local barley straw for insulation, only the glass, the structural wood and the bitumen sheets come from outside the region, but accessible for locals too.

Our long term goal is to let the project become a model for other communities, which has a chance to get realised as soon as 2017.

Besides the conservation projects, we have worked on supporting and building lasting relations with the community of Zangla themselves. Part of that initiative is our educational programme in the local schools: helping with teachers, books, education materials. Since 2009, every summer we have organised volunteer teachers to travel to Zangla and teach the kids who are left without teachers because of shortage of staff. We help with their current studies and complement them with fields that are lacking from the curriculum (such as P.E., drawing). We can help with most subjects, because the language of education is English. At the same time, due to the poor English skills of the students, we have a lot to work with gaining a real understanding of the material, as well as training English communication skills and practicing talking to foreigners. While teaching in Zangla, we use the state curriculum for Jammu and Kashmir, but complement it with content specific to Ladakh and Zangla, as well as with projects developing various skills of the kids (e.g. photography, yoga, dance). We believe that the story of Csoma carries a message that is relevant to the children (too), and while teaching we can learn a lot ourselves from the local community. You can read about education in Zangla in more detail here. 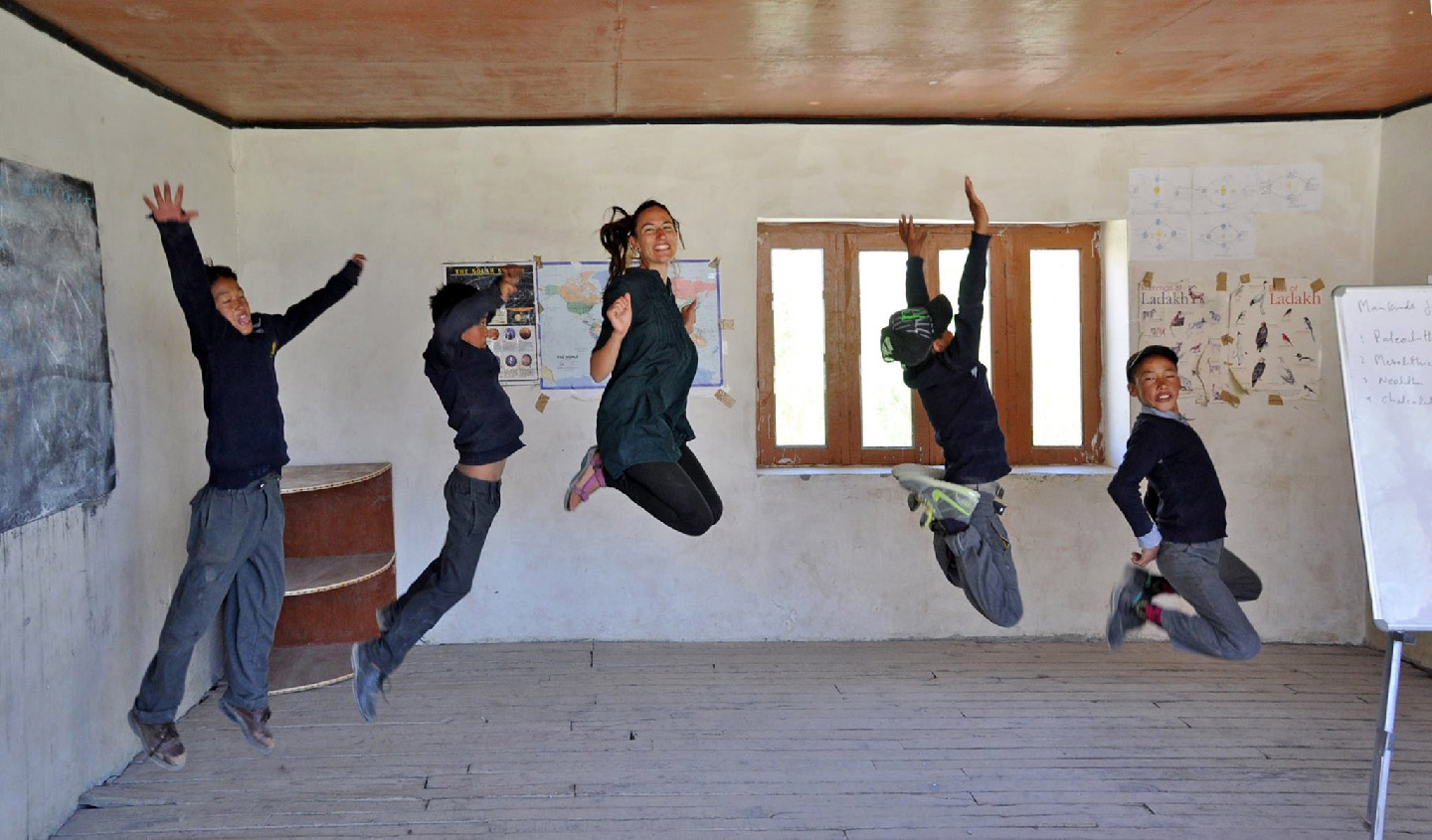 The long-term goal of community development is to enable the community of Zangla to realise the challenges of modernisation that await them, to formulate possible responses and put them into practice. In the framework of the Vijayak Project, the Indian Army has been building a road connecting Leh with Padam (crossing Zangla), and further to the South all the way to Darcha. The importance of the project is that the new road will most likely make it easy for goods and services, as well as tourists to reach the region – which will speed up the processes of modernisation. What can and what should be done, when a region that has been self-sustainable for centuries and is still preserving traditional values, is being integrated into the country’s commercial and touristic infrastructure? What kind of changes is it going to bring about, and what kind of help can a foreign – Hungarian – NGO provide? The community development program is seeking answers to these questions, while trying to integrate the locals as much as possible in the decision making, and empowering them to act as a community.

From 2012 Ákos Debreczeni tibetologist spent three seasons to document the library of the Zangla Royal family, about 90 thousand pages. Currently he is about to analyse and catalogize them in cooperation with the rK&Ts Project of the University of Vienna. In the Mulbekh and Leh residences of the Zangla King further material might be available that deserve documenting, and the processing of the already documented  material is necessary too. 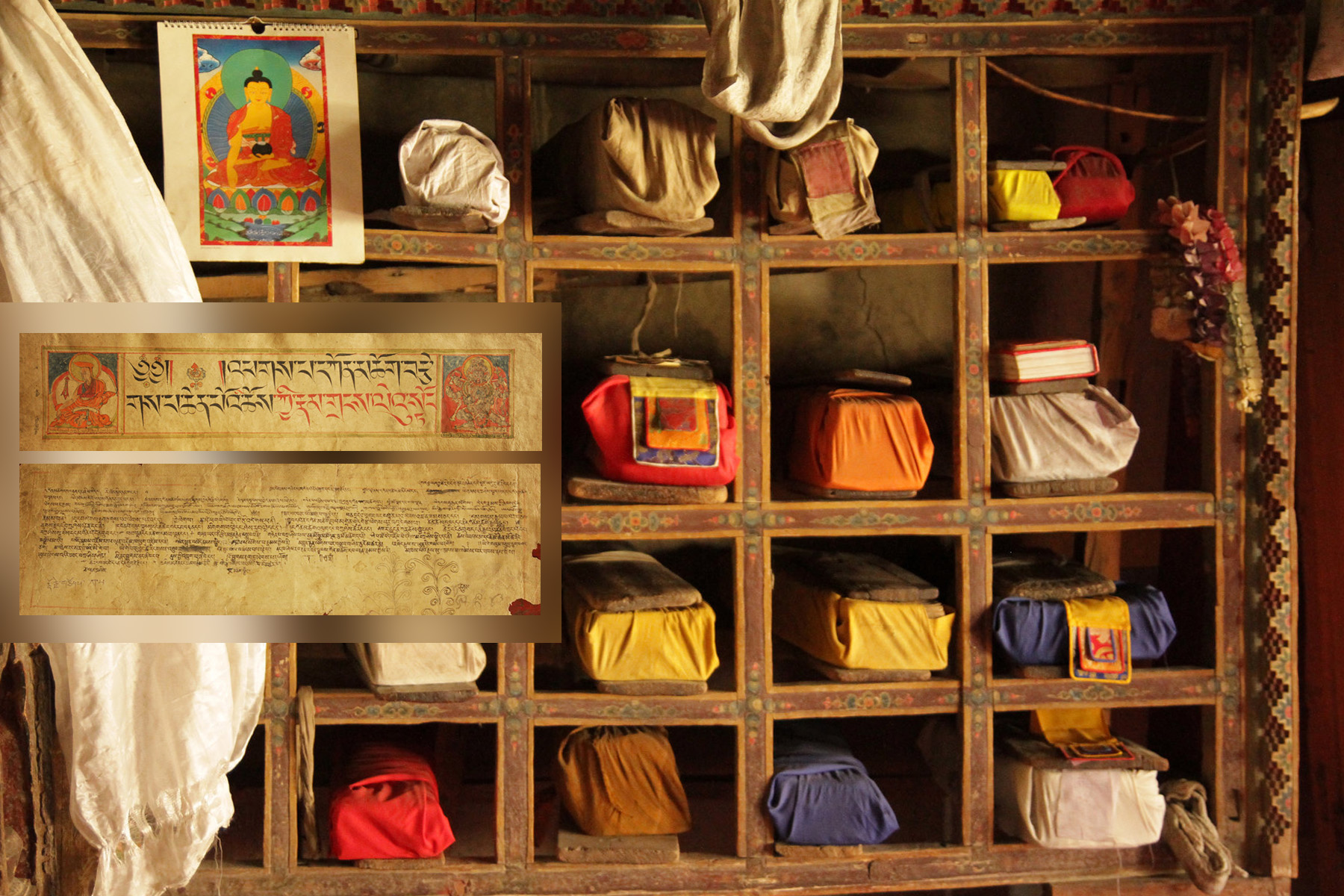